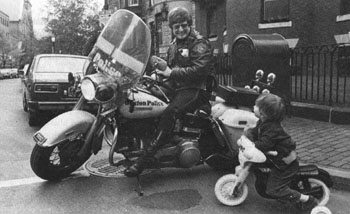 Human behavior is learned, thus all behavior can be unlearned and newbehaviors learned in its place. Behaviorism is concerned primarily with theobservable and measurable aspects of human behavior. Therefore when behaviorsbecome unacceptable, they can be unlearned. Behaviorism views development as acontinuous process in which children play a relatively passive role. It is alsoa general approach that is used in a variety of settings including both clinicaland educational.

Behaviorists assume that the only things that are real (or at leastworth studying) are the things we can see and observe. We cannot see the mind ,the id, or the unconscious, but we can see how people act, react and behave. From behavior we may be able to make inferences about the minds and the brain,but they are not the primary focus of the investigation. What people do,not what they think or feel, is the object of the study. Likewise the behaviorist does not look to the mind or the brain to understandthe causes of abnormal behavior. He assumes that the behavior representscertain learned habits, and he attempts to determine how they are learned.

The material that is studied is always behavior. Because behavioristsare not interested in the mind, or its more rarified equivalents such as psycheand soul, inferences about the conditions that maintain and reinforce humanbehavior can be made from the study of animal behavior. Animal research hasprovided a very important foundation for the behavioral approach. Thebehavioral researcher is interested in understanding the mechanisms underlyingthe behavior of both normal individuals and those with problems that might bereferred as "mental illness". When the behavioral model is applied tomental illness, it tends to be used for a wide variety of presenting problems. It is perhaps most effective in treating behavioral disorders and disorders ofimpulse control, such as excessivedrinking, obesity, or sexual problems. Behavioral approaches may bequite useful in treatment of anxiety and have occasionally been helpful in themanagement of more severe mental disorders such as .

Ivan P. Pavlov is Russia's most famous scientist. He first won greatdistinction for his research on the physiology of th digestive system. Pavlovencountered a methodological problem that was ultimately to prove moreimportant and more interesting than his physiological research. He haddiscovered "conditioning".

For Pavlov, all behavior was reflexive. But how do such behaviors differfrom the behavior commonly called "instinctive" ? Instinctivebehavior is sometimes said to be motivated. The animal has to be hungry, to besexually aroused, or to have nest-building hormones before these kinds ofinstinctive behavior can occur. But Pavlov concluded that there seems to be nobasis for distinguishing between reflexes and what has commonly been thought ofas non reflexive behavior. As a psychologist, Pavlov was concerned with thenervous system, and specifically the cerebral cortex, not with any lawfulnessthat he might find in behavior.

At a more abstract level, Pavlov thought that all learning, whether ofelicited responses in animals or of highly conceptual behaviors in humans, wasdue to the mechanisms of classical conditioning. We now believe it to be wrong,but it is none the less one of the great ideas of our culture. (Bolles)

John B. Watson was one of the most colorful personalities in thehistory of psychology. Although he did not invent behaviorism, he became widelyknown as its chief spokesman and protagonist.

Watson was brought up in the prevalent tradition: Mechanism explains behavior. In a widely used textbook (Watson, 1914) he said that the study ofthe mind is the province of philosophy; it is the realm of speculation andendless word games. The mind has no place in psychology. A science ofpsychology must be based on objective phenomena and the ultimate explanationmust be found in the central nervous system.

It was Watson, more than Pavlov or any other one person, who convincedpsychologists that the real explanation of behavior lay in the nervous systemand that as soon as we understood the brain a little better, most of themysteries would disappear. And, it was mainly because of Watson that so manypsychologists came to believe that what they called conditioning was soimportant. (Bolles)

B. F. Skinner is considered by many authorities to have been thegreatest behavioral psychologist of all time.

Earlier behaviorism had been concerned with stimulus-responseconnections. Skinner looked at the learning process in the opposite way,investigating how learning was affected by stimuli presented after an act wasperformed. He found that certain stimuli caused the organism to repeat an actmore frequently. He called stimuli with this effect the "reinforcers". Watson found that by providing reinforcement in a systematic way one couldshape the behavior in desired directions. Link to operant

Teachers have benefited the most from Skinner's fundamental work inreinforcement as a means of controlling and motivating student behavior. Itsvarious applications to classroom practice are commonly called "behaviormodification", a technique that many teachers consider to be one of theirmost valuable tools for improving both learning and behavior of their students.(Charles)

In looking for a more direct and effective explanation of thedevelopment of children's social behavior, psychologists sparked the emergenceof observational learning (or Social Learning Theory). Albert Bandurademonstrated that modeling or observational learning is the basis for avariety of children's behaviors. He stated that children acquire many favorableand unfavorable responses by simply watching and listening to others aroundthem. A child who kicks other children after he sees it occurs at thebabysitter's house, a student who shaves her hair because her friends did, andthe boy who is always late for class because others are, are all displaying theresults of observational learning.

In studying animal behaviors, the term imprinting wasintroduced by Lorenz. Imprinting refers to the appearance of complex behaviorsapparently as a result of exposure to an appropriate object at a critical time. This is demonstrated with newly hatched ducklings which will follow the firstmoving object they encounter and become attached to it (usually a mother).

A behaviorally oriented clinician has an interest in the responsepattern itself and the particular situations in which it occurs. He ultilizestechniques that enable the determination of the functional relationship betweenthe maladaptive behavior and the environmental stimuli that are affecting it. The clinician attempts to collect information that will enable him/her todetemine:

Commonly used applications by a behaviorist include: , negative reinforcement, , , , , ,time out, and .

This tutorial was originally created by: Lisa Bustamante, Debbie Howe-Tennant, andChristina Ramo in 1996.